All of our offerings are 100% online. Learn more.

Contact us today to register for one of our D&D groups or camps
staff@gamingtogether.net
Sign up today!

So grateful for the DnD world you have created for my son. It feels like he has found his kind of people...

My daughter has been attending Gaming Together for almost 3 years. As a gamer myself, I really wanted my daughter to have an interest in Dungeons & Dragons and other adventure games. Gaming Together has allowed my daughter to interact with others and bond over something that doesn't necessarily include sports. Playing D&D and other board games has increased her ability to do simple math and also has improved her ability to work out strategies in a group situation. Although gaming is fun, it has also taught her how to practice being patient, and how to be a better problem-solver by navigating the immersive world of the games they play.

She really enjoys working with Anna. Anna is fair, patient, and quite informative. She really understands kids and how to manage the dynamics of the group, all while being caring.

We truly feel so fortunate to be a part of such a great organization and can't say enough great things about Gaming Together.

Both of our kids have gone through many D&D adventures with Anna and absolutely loved it. Anna is terrific Story Teller and a very fun person. Besides D&D adventures, she also takes kids to many activities and teaches them teamwork, patience, conflict resolution, and other things that kids are not getting enough of in the era of solo play in front of a screen. Our kids' imagination, creativity, and sense of humor have had a great workout in every Gaming Together camp.

–Parent of 5th-grader and 8th-grader

With a family history of gaming, I was excited to learn about a summer and after-school camp where my son could role play along with learning teamwork, working on conflict resolution, and bonding with friends who love the things he does. He is so excited every week to be able to attend and begs for summer camps. He says, "I like how we have really fun adventures and how Anna makes the monsters do stuff." 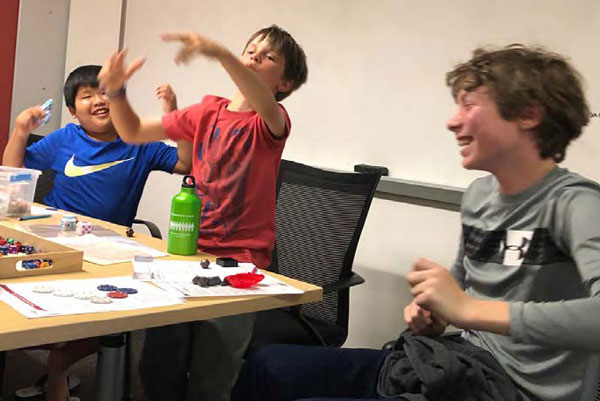 My son loved his Gaming Together camp more than ANY other summer activity he had last year. He still talks about the leader (Anna) and the friends he participated with. He's been pushing to go back ever since, as much as possible. He loved the D&D format and had a blast, but as a parent, I am so grateful for the skills training, conflict resolution, and coaching he got from Anna. She is incredibly compassionate, kind and smart, but also understands and relates kids better than almost anyone. My son's quote is, "She just GETS me, Mom," and I think that speaks for itself. Thank you for doing such an amazing job!

I love D&D because it is fun and we get to fight monsters and see our friends over the summer. 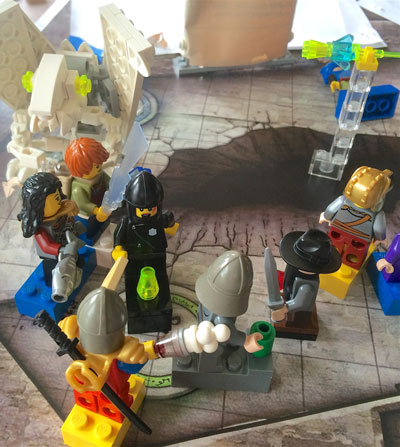 George loves D and D so much, and it has been so meaningful for him to be able to be in this group. He says he really likes the Story Teller and the other kids in his group. He loves reading and thinking about D and D, and has helped me create my own character. (Her name is Ikra, and she is a warlock who is part mouse.)

I have been going to Gaming together for almost three years now and I really like it because we play Dungeons & Dragons and other really cool board games. Dungeons & Dragons is this board game where you pick your character and build your mini figure out of Lego, and then with the other people the story begins. You get to choose what you want to do in the game. For example, if you were fighting a gargoyle, you could chose to run away or fight it or whatever you wanted to do.

I think Dungeons & Dragons is good for other kids because it involves teamwork and what your character would do in the game. But one of the rules is no backstabbing, which I really like so you can’t kill your own friends and if you die you can be revived. That's one reason that I think Gaming Together is really fun! Another reason I like going to Gaming Together is that I get a chance to play with other kids who I don't normally play with at school. It taught me to have something in common with other kids since I don't play the sports games at school.

My son has been gaming here for years. I am so impressed with Anna's ability to help the kids learn to resolve conflicts, work as a team, and grow their friendships. Dungeons & Dragons is a fun and structured premise that he loves. I'd highly recommend this!

Both of my kids had a 1-week Gaming Together Dungeons and Dragons camp last summer and loved it. Anna is well-organized and is well-versed in hosting for all ages. The kids absolutely loved playing D&D with their friends. During the week, Anna had the kids make their own drawings of their characters and we were able to order keepsakes with stats and the kids' artwork. We love Gaming Together!

–Parent of 5th-grader and 7th-grader